The site isn’t free, it’s restricted and offers premium access to those willing to waste their money for invaluable information. Before you go wasting your precious time and money reading these escort reviews, I want you to take a closer look inside the site and what they do by reading my official review. 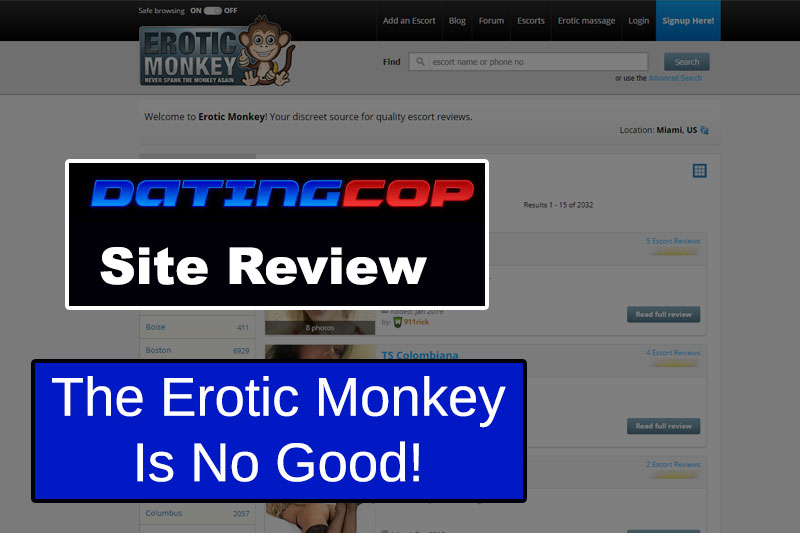 Have you ever been to the zoo? You know the cage that’s filled with monkeys? Well, they typically are throwing their crap at each other and it’s a stinky mess, right? Yes, the same applies to the EroticMonkey.com.

The website is basically a huge ripoff and then some. Most of these escort review sites are free but not this one. It’s actually very expensive and not worth the money at that. They use the freemium method of luring surfers in for nothing but trouble.

What You Get For Free On E.M.

So, when it comes to using the site for free, you basically get absolutely nothing at all but access to a page that’s blank or with hidden data.

It’s possible that some of the escort ads posted on EroticMonkey.com are completely fake. I say this because I tried calling some of the women via their numbers on the website and I did not get anyone to pick up the phone. If escort models in reviews don’t even answer their phone, how on earth can you trust that they are real?

Massage Girls Are No Different

Paying For Reviews Is Foolish

People that use eroticmonkey.com often pay for access to reviews. This is probably the most foolish thing I’ve ever heard of in my entire life. For all you know, the reviews could be fake or even worse, they could be written by the actual escorts themselves posing as other people.

You may come across some girl that has smoking hot pics and reviews but that person on the other end might be a police officer trying to catch you in soliciting or being willing to pay cash for sex.

The premium memberships are not worth your time and paying for them just to read testimonials about girls is insane – literally.

How Much Do The Girls Cost?

Don’t forget that in addition to paying for your membership, you’re going to have to pay the girls to have sex with you. This is not cheap and often not worth paying for. There are incall and outcall rates, both of which end up costing between $200 and $450 for 30-60 minutes worth of fun.