Single guys always have the most fun at bachelor parties. That’s the honest truth and there is no way you’re going to convince me otherwise! That said, there are rules to throwing these last hoorah parties before you tie the knot. This article is the last article that you need to read on bachelor parties. Learn the rules, abide by them, and most importantly, have a kick-ass time! 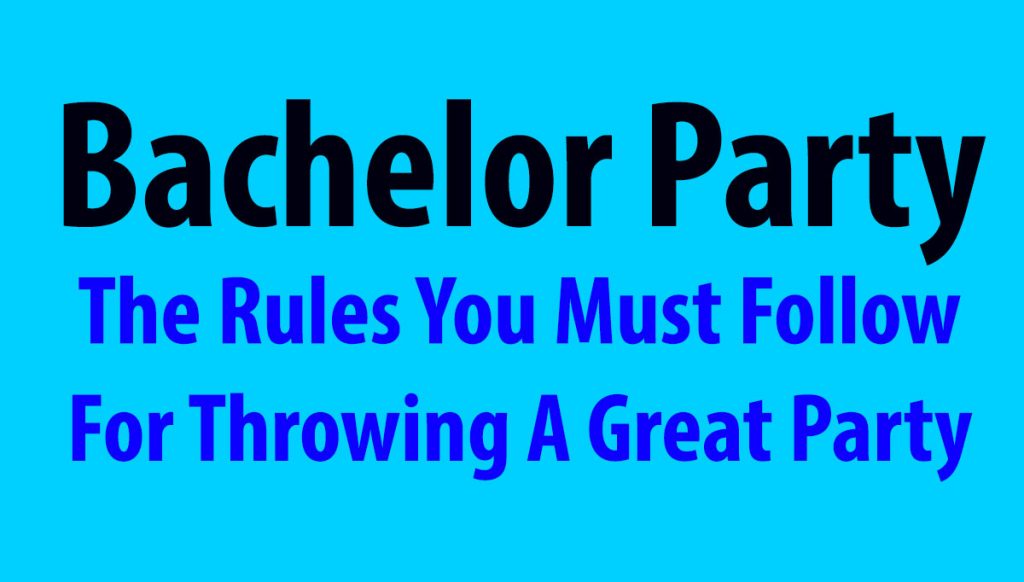 Bachelor Party Rules You Must Know

Bachelor parties are always a big deal. You’re sending your friend off into married life and you have to send him off with a bang. Pretty much all of the pressure is on the best man to make things go right. You really have to pay attention to what you’re doing if you want to make it a party to remember.

The trick to it is to not let things get too out of hand. No one wants to end up with a party that ends up ruining the first few months of a brand new marriage. That takes a decent amount of forethought that you just can’t forget about.

If you go about things like you’ve seen in the movies, you’re just not going to have a good time. There are a few things you can do to make sure that the bachelor is having fun but not overdoing it. If you can come up with a loose plan and stick to it, you’re going to be able to enjoy a night out with friends as you help your best one say goodbye to his single life. Here are the dos and don’ts of making a good bachelor party.

Just think of every comedy about a bachelor party that you’ve ever seen and you’ll notice one thing: There’s always a joke about hookers in it. They may be dead hookers or they may just be working girls.

Either way, they’re always there to offer some laughs and that’s exactly why you should avoid prostitutes at all costs. Your best friend may not be married yet, but that doesn’t mean that he’s not dating someone.

It’s not like he’s been going around cheating on his finance this whole time and this is his last shot. Don’t hire a hooker for any part of your night, no matter what. You can still hire a stripper, though.

They’re professionals and there to do a job. Even better, you can bring him to a strip club where everything happens in public.

It’s also a good idea to invite his future brother-in-law or father-in-law to make sure things don’t get too out of hand. He’s not going to go crazy when he has those eyes on him and that will extend to everyone else in the group. It’s just something to keep in mind when you’re planning.

No Pictures At All – EVER

If there’s one thing you have to completely outlaw during the bachelor party, it’s the taking of pictures. You don’t want any evidence of anything that happens that night. Just imagine how much damage they can cause.

If you end up going out to a strip club, he’s going to end up getting a lap dance. That’s just the way that things go on that night. He’s going to sit there and a stripper is going to grind all over him. Tips are going to be getting thrown at her and she’s going to be into it.

Now imagine someone taking a picture at just the wrong time and posting it on Facebook. Now things are going to go bad. His future bride is going to see it and she’s going to be humiliated. You don’t want that to happen.

It doesn’t matter if you have to collect everyone’s cellphones at the beginning of the night. Just make sure no one is able to take any pictures while you’re out. It’s the only way to make sure there are no issues with anything that you do. Keep your friend safe and everyone can have their fun.

As you’re out and having a good time, it’s going to be very easy to let things go too far. You’re the one who’s planning the party, so you have to take care of this. Make sure no one drinks way too much and gets out of control. That’s just never fun for everyone.

You’re also probably the one who’s driving. You want to make sure that you stay fairly sober. It may not be all that fun, but someone has to be the adult here. That’s your job as the best man. On top of that, you have to make sure that the groom to be doesn’t get too hammered.

Let him drink, but not get drunk. That may require watering down his drinks or getting him to drink water in between them. You’ll have to be clever about it so you don’t have to out and out cut him off.

That’s an insult that no groom should ever have to suffer on his big night. Just try to keep him and everyone else under control so you don’t end up in the back of a police car. That’s the worst thing that can possibly happen to you.

Don’t Let Him Pay For Anything

No matter what you do for the bachelor party, you have to make sure that the groom doesn’t pay for a single thing. He should never have his hand on his wallet unless he’s taking out his ID and that’s a rule.

There’s an entire group of you together and your all have more than enough money to cover him. After you have your fun on the town, it’s time to head back home and give him his gifts. Make sure he gets something with meaning to it.

Take a good long time to figure out what to get him. It should really be something that he’ll treasure for the rest of his life. If you’ve planned your night correctly, you’ll still have everyone together to present them.

Keep It A Secret

Make it a surprise party and you’ll never have a single bad memory about the night. That’s how you go about making sure your friend’s bachelor night will be something that he can fondly remember for the rest of his life.

Stay Out Of Jail

No one should get arrested and no one should be cheating on his spouse. With that as a base, you’ll have a great night of fun with your friends.

Conclusion: Enjoy The Bachelor Party But Don’t Ruin Your Life

The bottom line is simple, you can do a lot of things to enjoy a bachelor party. Just please stay somewhat in line and don’t do anything to ruin your life. People have literally gotten killed or done crazy things to ruin their entire life during bachelor parties. Think before you do – always. Now go enjoy the fun!