There are some sites out there that you just have to avoid. If someone were to ask me what types of sites to always steer clear of, I’d have to tell them all backpage sites. Believe it or not, there are lots of them out there. One of which is the Yesbackpage.com website. I can’t stress how important this really is. There is a lot for me to cover here and I’m going to do my best to do so. Here’s what you need to know about this alternative backpage site. But first, for those not familiar with backpage, I’ll sum things up for you here.

Backpage and all alternatives are simply classified sites riddled with half-ass escort ads. You know, sites like Bedpage.com and others that rip the original site. They connect people looking for sex with those selling their bodies for money. Simple as that and it’s flat-out illegal. Now, here’s the scoop on Yesbackpage.com. 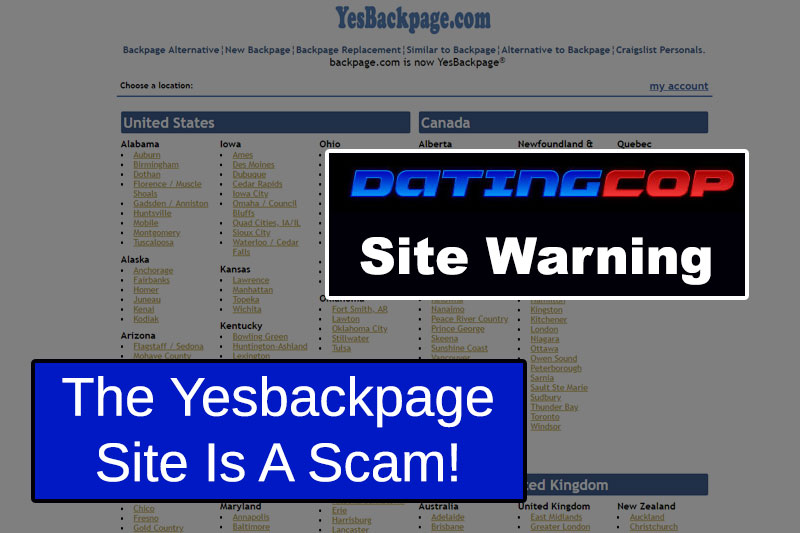 My Review Of Yesbackpage

It’s sites like this that give the adult dating industry a bad rap. These jerks create fake dating profile ads to sucker guys into contacting them. If you find yourself messing with this type of site and you’re thinking that you’re getting into a casual dating experience, you’re 100% wrong! Instead, you’re opening the floodgates to fraud, legal issues and perhaps death.

There are lots of girls that post on this site and they do so without using the term “payment.” Many people don’t realize that you need to pay for sex with these women. Oh, let’s say you want to post an ad to attract some woman? Guess what, you need to pay to place that ad on the website. They’ll accept anything in terms of payment, even the shady Bitcoin, which makes it difficult for people to trace someone back. There’s too much anonymity involved here with posting ads on Yesbackpage.

If you take a close look at the rest of the categories aside from the casual dating section is empty. I mean it’s like a graveyard Not a single living person is on the site and zero ads in these sections to boot. That’s because there are no people looking for anything here. It’s simply a site that people are using to cover up the escort dating connection and nothing more.

If you take a closer look at the site you’ll notice that the ads for escort girls and the casual dating ads are literally identical in some cases. This is beyond frustrating for a guy that’s not willing and able to spending hundreds if not thousands of dollars to hook up with some dirty girl for 1-hour.

The advertisements that you see on Yesbackpage.com are 100% stolen. They’ve been ripped from the original backpage (not an alternative) in order to make it seem like they are a unique site but they’re nothing of the sort. You will literally get zero value from this site and in fact, you just might end up behind bars if you try hiring a hooker that’s a law enforcement officer.

If you think paying a site that’s connecting consumers with hookers is safe, then you might be an idiot. For real buddy! Don’t think for a second that if this site gets pinched that they won’t rat you out and your information.

You’ll burn with the ship along with the rest of the pimps and hoes. Seriously, get a clue if that’s what you’re thinking!

I found zero value in using the yesbackpage site. In fact, I feel dumber for wasting my time surfing this site with little to no value. If you’re looking to connect with a girl that you don’t have to pay, then great – do it on this site.