I’m going to be completely honest with all of you. I never use the services of an escort and I would never recommend anyone else do so either. Look, I’m not being a prude here, I’m all for getting your groove on with whoever you want. That said, using Live Escort Reviews is something I would not typically do or agree to do if someone suggested it.

What I do worry about is the fact that a) Paying for sex from a prostitute (escorts, streetwalkers, hookers, whatever you want to call them) is still pretty much illegal in 99% of the United States. This isn’t me being lame, it’s the law, and I don’t know about you, but I don’t want to get busted for something like that. And b) using the services of a paid sex worker comes with a lot of risks I just don’t want to take.

I’m sure you know them, but just in case you’re thinking with the wrong head, let me remind you what risks you face by hiring an escort.

If you’re still not worried about getting into some sort of trouble by hiring an escort, you’re a braver man than I and I wish you luck. I really hope things go well for you and you never run into a problem. And I hope you will consider my review of LiveEscortReview.com, a supposed escort directory that promises to help you find the prostitute of your dreams.

Does Live Escort Reviews really do all that it promises? I’ve spent time on the site to see just exactly what it has going on, I kept my mind open, and I’m here to tell you that not only is LiveEscortReviews.com not worth your time, it isn’t even safe to use. Fyi, this is now branded as EscortIndex.com. 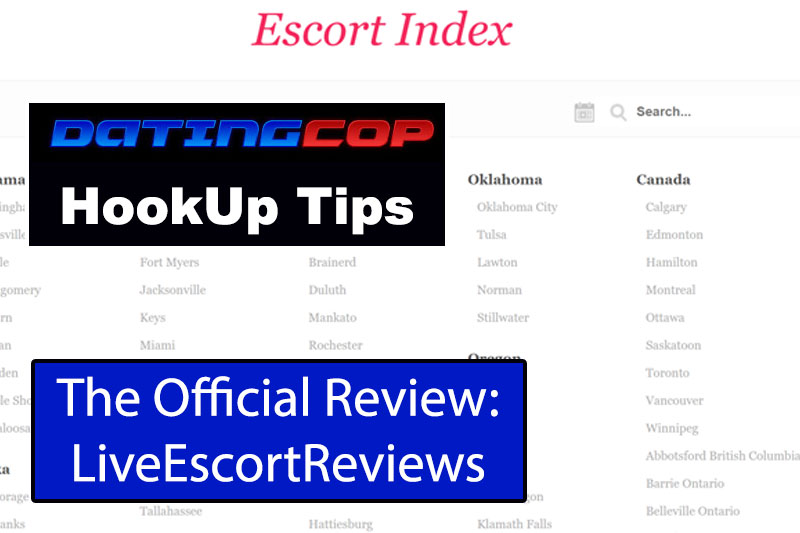 I’ve used many dating sites for my own purposes and reviewed many dating sites, hookup apps, and even escort sites to see which ones my friends and readers should consider and which they should totally avoid. Just like all those bad sites I’ve reviewed, LiveEscortReviews.com pulls the same shady things that they do. If you’re wondering why I think Live Escort Reviews is a bad site, well, here are the reasons why I think you should avoid it:

The escort profiles of LiveEscortReviews.com are all very hot. Like, legit too hot. “Why is that a problem?”, you may wonder. I’ll tell you why it’s a problem.

Any dating site or escort site that has super-sexy people is probably using fake profiles or has stolen the pictures and profiles from other sites. This becomes a problem when you contact what you think is a local escort and she is actually hundreds of miles away or you think you’re hiring a sexy woman and a not-so-sexy one shows up under her guise. I know it would definitely make me angry if I didn’t get what I ordered, hell I hate it when that happens with take out!

On a serious note, though. If you’re being told you’re going to get one person and another shows up, you truly have no idea who will be on the other side of the door. It could be the escort you chose, it could be another one who is really awful, or it could be a guy looking to beat you up and steal from you. It’s really a crapshoot and trust me, LiveEscortReviews.com doesn’t verify who posts on their site and they steal ads from other places, like Backpage.com and Bedpage.com, which was full of shady posts on its own.

Reason 2: Ads are fakes and you’re going to be bombarded with pop-ups.

Once you get done drooling over the fake hotties of Live Escort Reviews, you’re going to see that there are ads EVERYWHERE. I’m not against ads on dating sites, they have to make money too, but I am against ads that are disguised as internal links. You know what I mean, it will say “Live Cams” or “Find Girls” and you’ll click on those links thinking you’re going to find exactly what they say.

You won’t. Instead, you’re going to be redirected to yet another shady site that will give LiveEscortReviews.com a kickback for you visiting their site.

If that isn’t annoying enough, once you sign up to use this site, you’re going to see nothing but pop-ups. Everywhere you turn while using the site, you’re going to be hit with a pop-up, usually for other sites like Chaturbate or other dating sites with more stolen images. Once I see this kind of thing, I pretty much know that whatever site I’m using is nothing but a marketing scheme and something I need to avoid.

Ok, the reasons I already talked about with Live Escort Reviews being a bad site are more just annoying. They aren’t terrible in the grand scheme of things, but this next reason is.

According to the terms and conditions of LiveEscortReviews.com are very eye-opening and under section 3.3.2.1 you will find their Hold Harmless Agreement. This pretty much states that when you sign up for the Live Escort Review site, you will not hold the site creators responsible for anything that occurs. This means you can’t come after them if you’re robbed, killed, ripped off, get a disease, arrested, anything.

Oh, and if you try to sue them, you’re liable for their legal fees. Comforting, isn’t it?

You also need to remember that under the terms and conditions of LiveEscortReviews.com, you automatically agree when you sign up that you won’t be involved in a class-action lawsuit against them, that your information can be used by the site in any way they see fit, and you are a-ok with them sending you marketing spam as much as they want.

Please, no matter what dating site you join, take the time to read their terms and conditions. You will probably be surprised at what these bad companies can do to you.

I will never recommend to anyone that they join an escort site. But, if you’re going to join one, I would highly recommend that you avoid this site. There are literally no redeeming qualities to this escort site and the only thing you’ll get is a bunch of pop-ups, fake links, fake escort profiles, and your information used for whatever purposes LiveEscortReviews.com has in mind.

Trust me, using escort sites is risky, but using this site makes it that much riskier.

If you’re looking to get laid, not pay, and just meet someone to casually date then you’re best bet is to give this webpage a once over.