Women have a very different way of showing their sexual interest than men do. Where a guy is likely to simply ask a woman if she wants to have sex with him, women would never go that route. That’s mostly because of the way that society looks at women who enjoy sex with people.

It’s incredibly easy for a girl to get labeled as a slut and they never want that to happen to them. They’re going to have to spend the rest of their lives with people looking at them as sex addicts. That leads to women having to show their interest in ways that other people watching them can’t really pick up on. 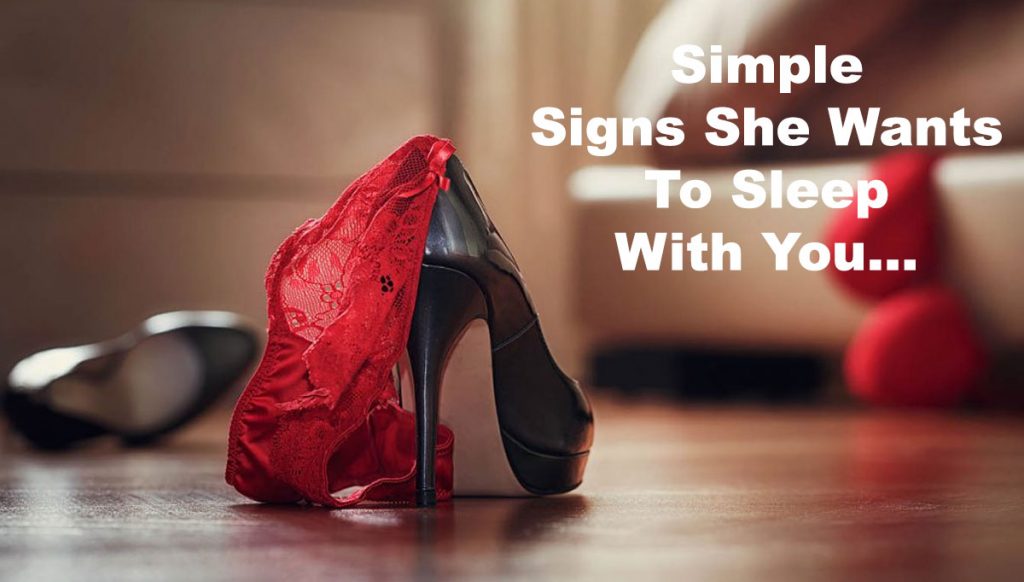 In fact, it may be so subtle that the men they’re flirting with won’t be able to pick up on it, either. It’s a very common occurrence for men to never know that the women they interact with are thinking about having sex with them.

Lots of guys end up missing out on relationships that could be extremely rewarding and fulfilling for both of them. If you don’t want to miss out, here’s how she’s showing signs that she wants you.

She Talks About Her Sex Life

One of the biggest ways that she’s going to show interest is by talking about her sex life. That’s not something she’s going to discuss with just anyone.

Keep in mind that women have to hide their sexuality here. If she just starts talking about her sex life and how unfulfilling it happens to be, it’s a sure sign that she’s interested in having sex with you and you should be keeping an eye on her from here on out.

It might not mean that she wants to have sex with you right then and there, but it’s clearly on the table for her.

She Likes Your Photos

If you’re friends on the social media account of your choosing, look out for her “liking” your pictures. That’s usually a good sign that she’s trying to get your attention.

She’s also obviously looking at the different things that you’re posting. It’s very easy to make a mistake here, though. Don’t take her likes as a sign that she wants you to flirt with her on your public feed.

That’s going to push her away. Just take it as a sign that she’s interested and look out for some additional ones.

She Starts Sexting With You

Now that she’s on your social media and talking to you outside of your private feed, she might just make the decision to start sexting with you.

This is an obvious sign that she’s interested in you. Once again, though, the sexting might be subtle. If she’s being playful and letting her sexuality come out just a little bit, she’s likely trying to sext with you.

It would be tough to get a bigger sign that she’s thinking about sleeping with you. Play along with her and sext back. Just don’t get too aggressive with it. Being crass will make her rethink the whole thing at this point.

She Makes Excuses To Touch You

When you’re physically together, there’s one thing that women will always do when they’re interested in someone. That’s the act of making excuses to touch you. This can come in many different forms.

The most common is finding an excuse to straighten your collar or grab onto your arm. It may be innocent, but it’s telling you that she’s interested in something more from you and things are starting to heat up for the both of you.

She Asks You To Cuddle

Once again, this is a clear signal that she wants to have sex with you. If you spend any time watching TV together or just hanging out alone, she might ask you to cuddle with her.

As it’s been mentioned before, men and women have very different ways of showing their interest. While cuddling may seem like something that only couples do, women will want to do it with anyone they happen to be interested in.

She may even just move in and put her head on your shoulder. That’s when you know that she’s interested in you.

You Get Invited Over

If she’s gone by the book and spent enough time showing you that she’s interested in her own way, she’s going to invite you over to her house at some point. That’s your red flag. She’s not inviting you over to play board games all night.

If it’s a one-on-one night at her house, she wants to have sex with you. You have to be ready to make your move at this point. If you fail to take her up on her offer, she’s going to lose her interest very quickly.

She Laughs At Bad Jokes

Another obvious sign is when she laughs at jokes that aren’t funny, just because you’re the one making them. You know if you’re being funny or not. You also know when you’re getting pity laughter. That’s not what this is, though.

She Gets Into Her Personal Life

Finally, if the girl you’re talking to ends up getting way too into her personal live with you, it means that she wants you to be a part of it. There’s a certain level of conversation that’s okay to have when you’re just friends or coworkers.

If she’s crossing that line and giving you details that she doesn’t give to anyone else, she’s giving you a sign. Take all of these things together, or one at a time. Either way, you have a girl who’s telling you that she wants you inside her.

Looking for more hookup tips? No problem, just check out my homepage for a complete list of the best articles I’ve written.

Best Sex Destinations In The World

How To Take A Good Dirty Snapchat