I’ve been frantically testing numerous dating sites over the last two weeks. Some of the sites that I’ve tested are really horrible. I hate having to report that but it’s my duty as the Datingcop to do so. I recently wrote a review on a dating scam site called Snapsex. Unfortunately, I came across another site that’s attempting to take complete advantage of individuals attracted to Snapchat. The most recent site is none other than SnapFuck. The good news for you is that I’m revealing literally everything I’ve learned about this site and what They do to scam users.

Again, I must stress the fact that this site is specifically attempting to attract people that are familiar with the Snapchat app. They take a very targeted and unique approach to trying to look legitimate when in fact they are not at all! Both Snapfuck.com and Snapfuck.me are complete scams and here are the exact reasons why. 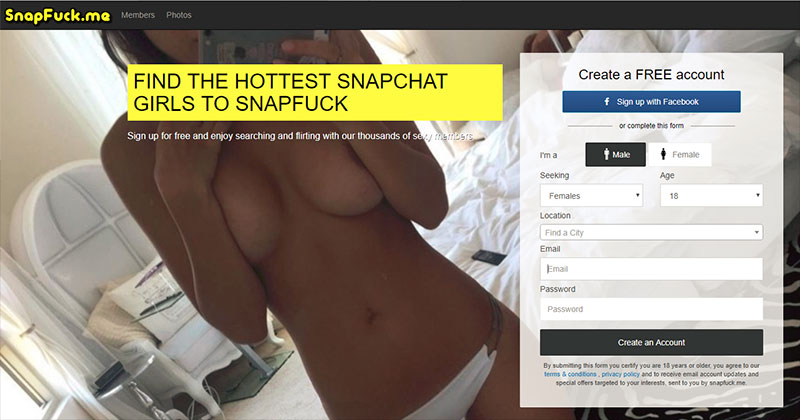 Why SnapFuck Is Not Legit At All!

Now, don’t even think about jumping on board and joining this site. If you do, you’ll be sorry for doing so. First, you must learn about all the things I’ve covered below. Here’s the real truth about this shady snapchat style app and site.

When you first come to the Snapfuck website, you’ll notice that there is a selfie of some girl who’s partially nude. I’ll tell you right now that she’s not a real member of the site. In fact, if I were to guess, I’d say that it’s possible that the image was even stolen. I’m not saying it is, but I’ve seen how these things work and I don’t trust that she’s a real user.

The next thing you’ll learn is that the site claims they have 1 million active users and 110 million chats per month. I’m sorry, but there’s no way in hell that this is accurate. In my personal opinion, I think this is an absolute lie. If they do have 1 million users, then why would they showcase the same few people in the scroll on the homepage? Think about that really!

I’d like to circle back to the banner as a confirm that this banner sends you to a completely different site aside from Snapfuck.

If you think this site doesn’t use fake profiles or fantasy profiles also known as virtual profiles, then you’re crazy. Although they claim that this is all done for testing purposes only, I still don’t buy it. Most sites that incorporate fake profiles do so in order to make the network look more abundant.

With regards to these fake or virtual profiles, you’ll need to remember that they have acquired these profile images in one of two ways. They’ve either purchased the profiles or they’ve stolen them. There is no other way around it and both methods are shady as can be.

They’ll Take All Your Money

Let’s say that you decide to join and you’re not satisfied. You then decide to pursue things legally. Guess what, assuming they win in court or mediation, then you’ll be liable for all court fees and legal costs. That means that a simple fee could cost you hundreds if not thousands of dollars in legal fees.

Must Upgrade To Do Anything

If you register on Snapfuck, you’ll need to then upgrade to do anything at all. For example, all the images and messaging that you want to do cannot happen until you upgrade your membership. Don’t worry, you’re not going to have to do that because I’m not telling you do upgrade or even join!

Assuming that you decide to stubbornly join, it’s going to cost you between $5.95 and $69.95 at the least and that depends on how long you join for too. The average price of a one-month membership is $34.95, which is reasonable, but only when the site actually works!

Conclusion: SnapFuck Is Fake And A Huge Scam

If you’re looking to join a real Snapchat dating or quick sex site, then Snapfuck isn’t it. Instead, there are plenty of other sites that you should think about joining. This one right here is perhaps the worst of the worst in terms of snap style sites. My advice would be to try this site instead of using Snapfuck.co.

Now, it’s extremely important that you understand that not all dating sites are scams, but many of them out there today are. It’s simply the facts and what’s most important is that you do your homework before joining any of these Snapchat focused dating sites.